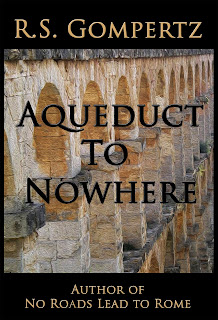 It took four years and many re-writes, but "Aqueduct to Nowhere," the sequel to "No Roads Lead to Rome," is finally here!  Given that "No Roads" took about nine years to get published, one could argue that I'm getting faster. Initial reviews suggest I might be getting better, too.

In blog post here, I wrote about how the "No Roads" story found me and how its colorful characters colonized my mind. Many of the bamboozlers, fools, heroes and sages who navigated the chaos and obstacles of "No Roads" have returned in "Aqueduct."

The saga takes place during the week of Saturnalia, a solstice festival that was wilder than the wildest Mardi Gras imaginable. Slaves become masters and masters, slaves. Anything goes and often does.

The action kicks off immediately when a low level security guard named Gaius Severus, the hapless conscript from "No Roads," is kidnapped for initiation into the mysterious cult of Mithras, God of Soldiers.

Severus would have liked nothing better than to forget his Jewish origins and assimilate into a comfortable position within the imperial administration. Unfortunately, his rebel brother Marius is hades-bent on overthrowing the empire with outlandish stunts and protests. Worse, his strong and psychic girlfriend Lena joins forces with a ship full of female pirates who came to settle a grudge with the inept bon vivant Governor Festus Rufius.

Gaius Severus wanted a quiet life and he's rewarded with the opposite. He didn't ask to be thrust into a world full of thieving politicians, rogue praetorians, assassins and rioting citizens but he rises to each occasion, survives, thrives and solves a few mysteries along the way.

The indie success of "No Roads"  helped me develop a thick skin. When one critic said that he enjoyed the back of a Cornflakes box better than my novel I studied the cereal box for insights and posted a one-star review here and on Amazon.

That said, I appreciate the thoughtful reviews, good and bad, and tried to learn from them all. With the exception of a couple of excursions I couldn't resist, in "Aqueduct" I tried to avoid  tangents that amused me but dissipated story momentum. I developed  strong female characters and let them kick some ass. My people are more three dimensional, their internal and external conflicts more human.  There's even a bit of romance.

Ancient Tarragona, Spain in  A.D. 123 was an age where many Gods and cults were competing for one's devotion, a time when might made right and those with the gold made the rules.  One superpower, Rome, ruled supreme but there were cracks along the edges of the empire.

As in our world today, corruption, incompetence, and self-interest competed with hope and idealism to drive history forward. Then, as now, people were still people--their pathos, quirks and foibles fertile ground for humor. Have we changed all that much over the millennia or is really our world I'm writing about?

There's no better time than the past to laugh at the present. Historical friction.

I hope you enjoy "Aqueduct to Nowhere." If you agree it was worth the wait, please spread the word by posting a review at Amazon, Goodreads, or elsewhere.


"No Roads to Rome" and "Aqueduct to Nowhere" can be found at Amazon USA and Amazon UK as well as other sites.
Posted by R.S. Gompertz at 8:42 AM 1 comment:

I grew up worshiping the Beatles. I've listened to them on every format from the little radio I immortalized on YouTube to the cloud player that doesn't sound any better than that old nine-volt transistor radio. I've bought Abbey Road in vinyl, cassette, CD, and MP3. As soon as I verified that my kids ears worked, I pumped Yellow Submarine into their heads.

In addition to some serious philosophy, The Beatles had a whimsical sense of humor. So what took me so long to spoof them in this piece called Ringo Marries Yoko and why do I feel guilty for dumping a bit of satire on those two?

I feel similar angst over the piece where I announced that the Cirque du Soleil would abandon their artsy abstract performances. After denouncing shows that only grad students can understand, the article goes on to describe a new show that only a grad student could understand.

In Disney Buys the Holy Land, I offer a viable solution to the Israel/Palestine dispute: turn the whole region into a theme park. Disney's touch will, by definition, render Jerusalem the happiest place on earth. When it comes to ideas for rides, spectacles, and action figures,  Lord knows the Holy Land has material to spare.

By now, everyone on earth has lived through at least one financial meltdown caused by someone else's greed. My pieces entitled "Downsize your Children" and "Kick Your Assets" are intended as helpful guidance for navigating the next Wall Street induced crisis.

One way to combat financial Armageddon would be to fix the US healthcare system. In "Buggy Obamacare Website Cost More than Iraq War," I postulate that the cure might kill the patient. No worries! We can always migrate to Canada for free health care.

Speaking of Canada ... because these pieces show up in The Sage, a Canadian humor site, I felt obliged to pick on my northern neighbors in "US Immigration Refused Entry to Migrating Geese."  Humor aside, those geese are lovely to see in flight but kind of disgusting up close.
Posted by R.S. Gompertz at 7:55 AM No comments: