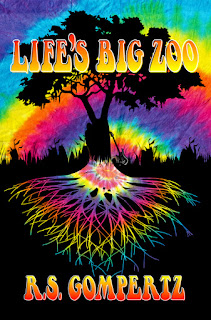 After a day of hiking the red rock canyons, my wife and I went to investigate Airport Mesa, a local vortex site, to see if we could feel the legendary power emanating from deep within the earth.

Scorpions. Rattlesnakes. Black widow spiders. Coyotes. Wild boars. White women carrying babies on their backs and revolvers on their hips. Seems like everything in Arizona can kill you. Surely the vortex would offer some balance to the relentless assault of natural hazards.

After competing for a parking place with drivers who were less than mellow, we climbed up to the mesa and competed for photo opportunities. Nobody was meditating or doing yoga. No chanting. The closest thing to interpretive dance was a kid trying to bug his grandmother by doing the Gangnam Style dance. He seemed to be having a spiritual moment. She wasn’t.

I couldn’t feel any earth vibrations but the sky was darkening and the views were beautiful.

A storm was approaching so we stayed to watch it arrive alongside the frail old woman whose family and dancing grandson had already descended.

When the wind gusts hit, we were nearly knocked off the top of the summit. (The next day, I would learn that the gusts had hit 55 miles/hour up there. To get a sense of this, stick your head outside the car next time you’re driving down the freeway.)

My wife smartly dropped to her knees to minimize wind resistance.

The old woman was disoriented and her oversized jacket filled like a sail. She was about to paraglide off the edge when I grabbed her thin arm. Her jacket hood blew over her face. My face was getting pelted by the fine red dust that makes the region so beautiful when it’s not trying to kill you.

Both of us were in trouble until my wife grabbed the woman’s other arm and guided her to a cable that serves as a guide rail.

Once stabilized, I looked down the hillside and saw the old woman’s adult son or son-in-law watching the whole drama unfurl. I waved frantically, hoping he would come and help his scared and uncooperative old granny, but he just turned and left. Not exactly a moment of new age love and understanding.

The three of us we all inched down the hillside half-blinded by stinging dust, buffeted by the crazy winds gusting out of the canyon. It was really scary.

Truth is, it almost got me.

After a grim and grueling year, our well-deserved December holiday is finally here. We will don pointy red hats, exchange gifts, and eat too much. Drink we must and drink we will. We will celebrate the Birth of The Lord on December 25th.


The festival of Saturnalia starts on December 17th and culminates with the birthday of our glorious Sol Invictus on the 25th.  We pray and sacrifice for King Sol to light our benighted world.


It’s the most beautiful time of the year, the joyful season when both the poor and the mighty decorate their shops, homes and streets with brightly colored ornaments when. We light candles and hang lanterns to counter winter’s darkness.  Our neighbors and co-workers wear outlandish outfits, and many enjoy the temporary suspension of public morality to dance, disrobe, and engage in acts that would be make a pig blush during the rest of the year. For those who need extra encouragement there will be mulled wine and spiced drink to lubricate long nights of wild irreverence.


Every city, town and village will designate a “Lord of Misrule” to lead the way, encourage mayhem, and speak truth to power. Remember: short of murder, nothing you say or do during Saturnalia can be held against you. Bosses become workers and workers, bosses.  The meek inherit the earth and turn it upside down, if only for a week. So stick it to The Man and enjoy it while it lasts.


Alas, no good tradition goes unpunished. There is a dark side to all the merriment. Prudish forces of political correctness are trying to co-opt our ancient ways. The holier-than-thou insist upon saying “Happy Holidays” instead of “Io Saturnalia.” These self-proclaimed saints demand that the traditional week of debauchery be replaced with just one quiet, solemn day on the December 25th.


Don’t be fooled by these repressed pilgrims! The puritanical few should not be allowed to dictate morality over those of us who honor tradition. We true believers must hold fast to our lasciviousness and sacrifice. And when it comes to sacrifice, don't forget that the Gods prefer suckling pigs.

Want more? The first chapter of "Aqueduct to Nowhere" will transport you back to the Saturnalia festivities and chaos that follows in 123 A.D..
Posted by R.S. Gompertz at 8:32 AM 1 comment: