Asked why they had waited over two-thousand years to complain, Spain’s Special Prosecutor argued that “it took a long time to build a solid case given that much of the evidence was intentionally buried.”

A spokeswoman for the Italian government dismissed the charges as unfounded. “Our legions left Hispania in good shape,” she said. “The Visigoths must have messed it up. Sue Germany, not us.” 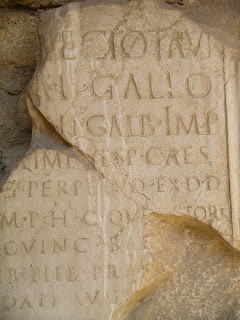 Clear Proof of Foreign Meddling!
Posted by R.S. Gompertz at 7:53 AM 1 comment:

On the Fly Winter Bargains

Now that winter has arrived in Europe, the low-comfort, low-cost airlines—many of whom require customers to help push their own planes onto the runway— are falling all over themselves to offer cheap fares to exotic locations. Last week, for example, tourists could fly from frosty Torp, Norway south to semi-tropical Weeze, Germany to for only 15€. (Taxes not included.)
In an all-out air-war over prices, the low-budget carriers have figured out that bargain lovers will rush to some of Europe’s’ most out-of-the-way places just to save a few quid. Thanks to Ryanair, for example, many  Spaniards will spend the winter in Skavsta, Sweden for the simple reason that it’s a good deal.
To keep prices grounded, the no-frills airlines go to great lengths to skimp on costly luxuries like barf bags, or leg room for anyone older than six. The physics are simple: aerodynamically speaking, frills aren’t needed to keep a fully-loaded Airbus airborne. Besides, packing passengers together like carbon atoms in a pencil is good for massage therapists and, as a general rule, what’s good for massage therapists is good for the global economy.
In addition to subtracting every remaining sub-atomic particle of customer service, the low-cost kings have reduced staffing levels to the legal limit. This means that the person selling you duty-free “Pringles” is also piloting the plane. By dropping the air-pressure in the cabin to that of deep space, the airlines are assured lucrative profits on water sales to dehydrated travelers.
Fortunately for us, the intense focus on savings hasn’t impacted safety. I salute the airlines’ efforts to reduce expenses by not equipping planes with flotation devices.  Who really believes that, in the event of a water landing, you’ll be saved by your soggy seat-bottom?
Posted by R.S. Gompertz at 6:51 PM 1 comment:

Barcelona’s El Prat is my favorite airport in Europe for the simple reason that the security guards trust the passengers. Their abundant faith in the basic goodness of humanity was confirmed when I flew from the Catalan capital to Frankfurt-Main without being asked to show a shred of identification.
After a delayed departure, I landed in Frankfurt with less than thirty minutes to catch my connecting flight to the USA.  But the long, slow-moving line of cheerless passengers at the first security checkpoint suggested that this airport did not consider me, or anyone else to be a trustworthy traveler.
One at a time, we were searched and scrutinized by the stern Saxon sentinels. “It’s for your own security,” shouted a customs agent wrestling a rosary loose from a devious looking nun.
Those of us who passed the first test were sent on to the next congested checkpoint where for every security guard working, there were five others chatting idly. This was an obvious attempt to provoke the psychologically less stable among us into a self-incriminating fit of frustration. Most of remained calm but it did help shorten the line a bit.
Plane after plane departed as we were herded through increasingly difficult tests designed to ferret out passenger treachery. A Turkish diplomatic was rudely told he would have to wait ten years before being allowed in the queue reserved for “EU Nationals.”
An immodest body massage from a former East German border guard contributed to my mounting anxiety. Did Germany want me to stay here forever? And why had Barcelona been so eager to see me leave?
The next line quickly halved when EU citizens lacking passports with  US government required magnetic strip were sent off for blood samples.  At the next interrogation station, families were grilled separately. Fretful husbands turned against their wives, and promises of “Kinder Eggs” induced terrified children to denounce their haggard parents.
Longing to be trusted again, I scanned the departure list hoping to find a plane back to Spain, but I was trapped. My self-pity was interrupted by the cries of a lost Ukrainian child. Fortunately a noble couple offered to adopt her on the spot.
At the next station we exited German territory and entered the militarized zone that now extends beyond US territorial waters and into airport corridors around the world.  We had passed the point of no return where Europe ends and the tightly secured land of the free begins. US security officials, probably Halliburton subcontractors, verified that no riff-raff had slipped through the gaping holes in the German security dragnet.
Leaving no stoner unturned, a teenager was dragged away when the guards found a  Cat Stevens song on his iPod.  An elderly man with a titanium hip implant set off the metal detectors so many times that a US Army Surgeon was summoned to remove it.
By this point, so many people had missed their flights that Lufthansa announced a special government program where, for 100,000 frequent flier miles, we could obtain temporary asylum in Latvia. Those who expressed interest were immediately arrested.  I'm happy to report that German prisons have vastly improved over the past few decades.
Posted by R.S. Gompertz at 8:22 PM No comments:

Prediction: 2011 will be the Dumbest Year Ever

I'm so tired of all the smug predictions from pundits, cultural gatekeepers, and  people who are smarter than I am. I offer my predictions for 2011 in the sincere hope that none of them really happen.

Show Biz,  Culture, and lack thereof:
Transformer Optimus Prime will have a trashy love affair with a garbage truck.
In addition to "friend" status, Facebook will add "acquaintance" and "who the F#%!#K is this person?"
Wikileaks will reveal Victoria’s secret.

Yoko will join with U2 for an album called “Plastic Ono Bono.” They’ll record in mono.
The “Cowboys and Aliens” movie will trigger an insufferable number of imitations including: “Clowns and Ninjas,” “Low Riders and Pirates,” and “Republicans and Immigrants.”
Politics:
To reduce the US deficit and increase his popularity, Obama will sell Louisiana back to the French.
After announcing her candidacy for president, Sarah Palin will vow to repeal all laws of physics that slow down the economy.
Business:
The US Post Office will eliminate Saturday delivery and no one will notice.

Bing & Yahoo will merge and relaunch as Boo-Hoo.

We'll learn that Google is really the CIA.

As a proactive measure, Toyota will just recall everything.

Whether any of this happens or not, it’s a mathematical certainty that 2011 will be an odd year. All the best!